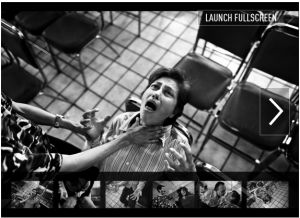 Screenshot from the article

Jesus is Losing on the Internet… Not really.  Jesus doesn’t lose.  You’d know that “Jesus saves” if you have ever read that terrible, yet slightly funny email forward that Al Gore sent out on the 6th day of Internet Creation.

This is the first post, in the series, Jesus is Losing on the Internet, make sure to checkout the rest of the deliciousness as it’s coming out of the oven.

But seriously, I’ve been reading some articles from the Huffington Post’s religion section.  They had a recent article on an exorcism photo shoot that was just ridiculous.

But, what was more ridiculous, was the people commenting on it.  If I may take the liberty to generalize (even though I commented on that article several times steering people away from generalizing… I know, I’m a hypocrite!), the comments broke down into two categories:

The religious crazies:
“HURRAY CRAZY EXORCISM, THIS IS A GOOD THING”.Even more disturbing was this comment by someone from the Desposynci “church”: In a Desposyni exorcism, we teach the person how to breathe in Love Energies and how to breathe out a demon’s energies. Then, we direct a flow of Rapture level Love Energies into a person’s Soul dislodging a demon’s hold on a person.
I use little “c” church, as they are far from biblical, claiming secret writings discovered in a cave in 1997, and being direct descendants of Jesus.
The anti-religious crazies:
“I TOLD YOU SO INTERNET, ALL RELIGIOUS PEOPLE DO THIS AND ARE RUINING EVERYTHING”

There were a few voices of clarity on both sides, but it was overwhelmingly depressing.

It begs the question, should we as followers of Jesus (assuming that I’m only semi-crazy) spend more time trying to bring truth, light, and life into the internet? In what ways can we use something as simple as commenting on crazy online articles, as a tool for advancing the Kingdom, and helping people overcome spiritual abuse?

I walked away from interacting with that article in quite the frump.

I’m on the fence. Is there any point in putting the voice of truth into a crazy hot mess, or will the time spent doing so just enter into the void that is the internet? I’d like to think, that true truth always guides us towards God. So I might spend some time pursuing this, though some more humility would be good for me.

Want to Invest in Our Family and Cambodia?