Here’s another Motion Scripture based on Matt 6:16-18, it was featured in this Episode of the Preposterous Project:

This idea was born out of a desire to be “the church” in our neighborhood.  This isn’t a systematic plan to invite people to church, though that’s not necessarily a bad thing.  Rather, it’s about building relationships and developing community so that we can love others.  If we base the value of our relationship with our neighbors off wether they come to church or not, then we’re missing the point.  We must value our relationships even if our neighbors never come to church, after all, the Church isn’t a building.  Hopefully that doesn’t sound harsh, but if it does leave me a comment and explain why!  I’d love to chat this up.

Want to purchase?  Have more questions?

The video mentions an Ideabook which  has some simple ideas to get your brain churning. Here are a few sample pages to give you a feel for what’s included.

I’d love to hear you thoughts on the video itself.  What did you take away from it?

Here’s another simple video for episode #5 of the Preposterous Project.  (I’m not sure if you’re picking up on the trend, but I usually refer to all my videos as simple, that way, if you complain, I can say “well sure… but it was just a simple one 😀  ).  I recently started taking an After Effects expressions class at FXPHD, and use a “simple” expression to animate the swinging elements.  Rather than keyframing them by hand, the expression uses math to control the decay and overswing tied to the rotation property of the shape layer.  Here’s the full video for this episode:

Working with the Preposterous Project

This is a simple Motion Bible video that I put together for the Preposterous Project.  I’m making a weekly motion graphics (mograph) clip for them that goes along with their main verse.  The Preposterous Project aims at being a “not-so-typical” Bible study, and I’m happy to contribute in a small way (really small way).  Not only does this give me some space to create the Motion Bible videos, but it also helps me to continually be creating.  I often get overwhelmed taking on huge projects, and this allows me to have some boundaries to keep me moving.

We’ll be using the Preposterous videos in some unique ways when we kick off our new year of ministry in September.  Here’s Episode #4 which the above video is in: 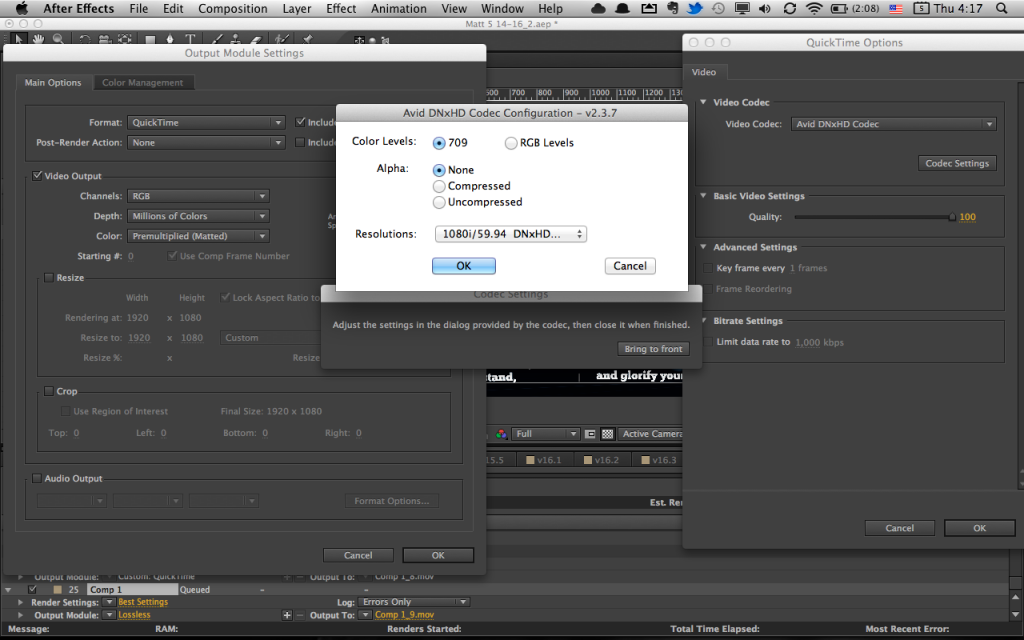 Finding the Sweet Spot of a File Size:

This post might not be helpful (or make any sense) to most people reading my site, but I’ve spent a LOT of time today scratching my head in utter frustration.  I’m making some Motion Scripture for the Preposterous Project (I’ll post the video when it’s finished), a fairly simple 30 second clip.  The clip has a light flare transition at the beginning and end, so the clip needs to have an alpha channel in order for it to work smoothly for the people who I’m handing it off to.  In After Effects, I’m fairly limited on my RGB+Alpha options within Quicktime.  The Animation codec was rendering files that where 2.5GBs (for 30 seconds!).  So after I did some poking around, and talking with peeps (or maybe tweeps?) on Twitter, I settled on using a codec that I had heard of, but never actually used.  Avid’s free DNxHD.  I downloaded it, and was pleasantly surprised with the codec options, allowing me to cut the file size down to 1GB.

The Problem and the Fix

However, I spent about 2 hours fiddling with the codec options trying to get it to “work”.  I’d import the clip into Premiere, and I’d have to transparency whatsoever.  There are a lot of codec options, so I figured I was doing something wrong.  Nope.  After giving up hope, I finally ended up on this discussion on Adobe’s site that held the solution:

This is a known bug that we were unfortunately not able to address before shipping (or several months later I might add). For now if you would like a temporary workaround please open up:

Then find the four lines containing ’AVdn’ that say decode. Change the decodefourcc at the end of the line from ’2vuy’ to ’argb’.

You’ll have to do this every time you update CS6 (this problem doesn’t happen in CS5 and CS5.5) until Adobe address the issue.

So, hopefully this post will be helpful to SOMEONE out there.  If you have any questions about the DNxHD codec, let me know and I’ll share my settings!